Came across this link which explains how to build a cluster in your drawing room in minutes!
Got to try it out sometime!

Posted by Srichand Pendyala at 3:07 AM

That's right!
My photogallery views, and bandwidth consumption have gone through the roof!
6000+ views, and nearly 1000 MB of bandwidth!
If you haven't already, then check it at http://srichand.net.in/photos !

Mukthi 6.03 was a grand success!
I've captured it in pictures at http://srichand.net.in/

Over 250 participants from in and around Bangalore and Mysore took part.
The overwhelming response should have finally silenced some critics...

My talk went pretty well, or so I think. I gave a very short talk (we were behind schedule by over an hour!), and gave away cds to the crowd at the end of. I asked 10 questions, and those who could answer them, got the CDs.
Its a lot of fun talking to an interactive audience!

I've also finally managed the time to throw a CMS onto my main page. Using an interesting javascript based theme with menu rollups and things for the main site now. Head over to http://srichand.net.in/ and check it out for yourself!

Mukthi 6.03 is finally underway!
Yesterday Swaroop's talk was a *big* hit! Bigger than anyone could have imagined!
Typing from the Hi-Tech seminar hall, even as the Manojit Majumdar from IBM, the Premium sponsors is speaking.
Atul Chitnis' talk was outstanding as usual, Biju Chacko enthralled the crowds with his knowledge of FOSS Licenses.
The crowd did start getting a bit un easy as Biju was talking, thanks to the 5th semester results, which came around at a very wrong time!
In any case, I got 66%, and passed all subjects! :D

More when I can post from here. My talk is at 3:30 PM. But will mostly get delayed by about half an hour.

Yay! I've finally got my new website!
Head off to http://srichand.net.in/ right away!

Just the photogallery is up right now. Next thing to put up is drupal for the main page.
Then a class scrap book.
Other apps like CodeView will come soon.

I've been trying to get Java web start working on Breezy, but no dice...

Its the DPI silly!

Finally got the brochure printed. (More like, vatsa got it printed for me.)
Two major boo boos.
One glaring blunder was the fact that we got an older draft version printed, while a newer improved version lay aimlessly on NAND gates in a plastic enclosure...
The other one was, that we (I!) made it at 72 dpi, all the while not realising that print demanded at least 96 dpi!
The result: Something that we're not quite happy with.

Mukthi 6.03 is in urgent need of sponsors! Know any company willing to sponsor Mukthi? Let me know too!
You may download the event brochure from http://srichand.net/mukthi.pdf

This I would guess is the first of many "official" announcements of Mukthi 6.03
We're still in very preliminary stages of planning, but trust me when I tell you its going to be *big* this time!
Slated for 17th and 18th March (tentative)

For those of you who've just joined us, Mukthi is a FOSS event aimed at students, by students.
The numbers after the name indicate the month and year. 03 for March, and 6 for 2006!
Last time's event was Mukthi 5.11. 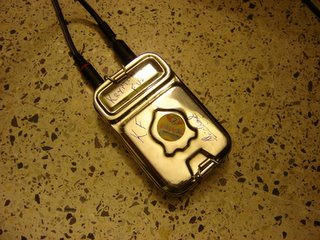 Introducing my own brand of Guitar Distortion Fuzz boxes!
The picture you see on the left is my first polished (literally) prototype of a fuzz box, and I must say, it sounds good!

Construction details are quite simple: Just put in a two level hard clipper circuit (silicon diodes are good) in the negative feedback loop of a 741 op-amp! That's it!

And when they tell you that the 741 produces very little noise, believe them!

This also marks my transition from transistor based preamps to op-amp based ones. Op-amps are so much easier to use, and have *much* lesser ambient noise!

The toughst part of it all was to cut the stainless steel box! Nails barely made a dent in it, while my hand drill couldn't even scratch it! I finally gave in, and chopped out an entire vertical section using shears (a wire cutter actually).

The metal box has two main advantages. Firstly its stable. It doesn't get thrown about too much even if you're the Kurt Cobain type. Secondly, and more importantly, it eliminates effects of interference from the surroundings.

Do we need mods?

Complain about the moderation system, and what do you know? You're a mod next!
So, is moderation good for a mailing list? In theory, its against free speech, so it can't be. But then, spamming and virus attacks leave us no choice.
So, should the solution be total and absolute moderation? Not in my opinion. I believe a more useful approach would be to allow certain trusted members, to post their messages through unmoderated. Got something to say about it? Say it!

This is going to be one long post folks, so you may want to get your fish and chips now!

Twenty years.
Thats the time I've been around on this little planet of ours.
Thats twenty birthday parties. Twenty (at least) cakes cut. 210 candles blown (summation i=1 to 20).
Never mind that.

Utter turmoil.
That describes the past week. My return from Hyderabad was uneventful. I can't say the same for the days following that though.

Firstly my college has promised us 50% (5k in absolute amounts) of the money we asked for, towards sponsorship of our trip to Kolkata for the ACM ICPC. Which basically means, we run around for a couple of weeks, going from pillar to post, at the end of which, we hopefully get our money.

I've now officially started reading up on Data Mining. All I know of Data Mining, is that its a misnomer.

This week also marks my GRE preparation. I scored a 1200 on my diagnostic test. Which means an improvement of 300+ is in order.

Additionally, February is the FOSS month. On the 17th, Neel and her gang are holding a FOSS event at MCC. They seem to be doing this with a level of unsurpassed professionalism. If you're an FOSS enthusiast, you *want* to be there!

And while we're in the FOSS month, I'll tell you about Mukthi 6.03 thats coming up. Its tentatively planned for 25th March. Its going to be bigger and better than last time. Watch this space for more details!

And then there's our college alumni website that requires working on. The initial template designs are more or less designed. The backends are ready. We only need to glue up the whole thing and most importantly, document it all.

In addition to all this, there's my pet personal project: The LED interface board! The idea was initially to write an XMMS plugin using the parapin library, to get the LEDs to dance to the song. The board has only 3 for now. I need to buy another 5. Now, I just hope writing an XMMS plugin is easy...

Added of course, the personal turmoil that I've been through, but I'll let that pass.

This place is *cold* ! There, I said it.
I am back at the old cyber cafe that I am used to. I introduced Firefox here a couple of years back. And guess what: All systems here now use the latest version, *exclusively* !
I haven't used a windows system in a while, so it suddenly feels very funny on this win98 box.
The newest Y! messenger I've been told so much about, is here. It doesn't seem very different. Just a lot slower and bulkier. And I just made my avatar too!

The FOSS-EDU group in Bangalore met yesterday, at Coffee Day, Cunningham road. The idea that the events have to be interactive, in some form or another, dominated the whole meet. Arky was there and shared with us some of his experience.
You can read more about the FOSS-EDU project here.

And thanks a ton to Praveen for putting in great efforts to make the whole thing happen!

I'll be leaving for hyderabad today, so the planet is going to stay stagnant till the morning of the first. At least.

A few of us working towards the FOSS month idea are meeting on Friday evening at 6 PM at Coffee Day at Cunningham road. If you're interested, contact me, or praveen or just be there!

Posted by Srichand Pendyala at 3:15 AM

Yes thats right! The vrlinug portal is finally out! Its still in its nascent stages, so any feedback is very welcome!
Also, its running from my home system, with a small pipe, so be gentle...

I just realised, my webhost doesn't provide me with shell access!!! WTF !?
I urgently need a new host. I need

Know one? Let me know!

Posted by Srichand Pendyala at 12:28 AM

Vrlinug needs a planet, among other things..
If you are a member of the mailing list and have a tech blog of sorts, then let me know, I'll add you to the planet, as soon as its up and running.

vrlinug has been dormant for over a couple of months now. Maybe we should all get together informally at a coffee house or something of the sort?